Celebrating Over 100 Years of Transport

We are a family run business and have operated in road haulage since 1910. We provide a professional and reliable service specialising in the transport of abnormal loads; including static caravans, park homes, log cabins, boats, over size vehicles, machinery and large structures. We also transport touring caravans, vehicles, agricultural machinery, and carry out general haulage including container and bulk tipper work. We are able to transport anywhere in the UK.

The company was founded by our grandfather Fred Nicholls in 1910.  He started transporting milk and timber for the local farmers in the nearby village of Wanstrow using his horse and cart. In 1930 the business moved to Witham Friary, this was due to his success and the expansion of the company, who were then transporting milk, timber and livestock.

Our father Leonard, joined our company in 1935 at the age of 14, he was mainly working with horses extracting timber from the local woods, until the age of 17 when he started driving lorries, this led to our diversification into the transport of agricultural produce and bulk commodities. During 1982 a customer requested that we move their mobile home; this was the beginning of the static caravan and park home side of the haulage business that currently operates today.  The company has gone on to development significantly over the years and now regularly transports a wide variety of military and plant vehicles as well as animals feeders and other farm machinery.  We are also heavily involved with the transportation of bulk feeds and aggregates and have lorries which run containers to and from Southampton docks.

Fred and Jess, the two sons of Leonard took over in 1999 and together we successfully run the company. 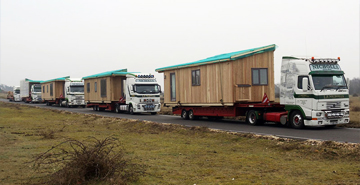 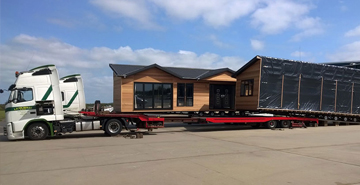 I would like to express my thanks to you and your staff, including the ladies, for your expertise in the transport and siting of our new mobile home.

I will recommend your services to anyone requiring such a good workmanlike manner.

Thank you so much for delivering our caravan to our home. Your excellent service was prompt and efficient; it was a real pleasure to watch your skilled team relocate our caravan with great care and attention. We would recommend LF Nicholls & Sons to anyone who requires their caravan moving.

Dear Fred, I cannot thank you enough for the hard work and professional service you provided when you delivered my caravan. You pulled out all the stops to meet my deadline and deliver on time ensuring I had a stress free holiday.